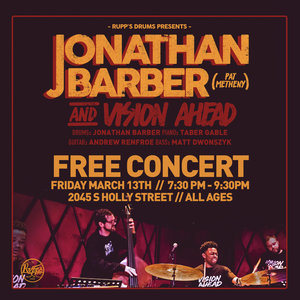 In addition to his first-call status as a sideman, Barber has recently stepped forth as a composer and leader with his Vision Ahead band, featuring saxophonist Godwin Louis, guitarist Andrew Renfroe, bassist Matt Dwonszyk, and pianist Taber Gable. Even with Barber’s history of high-profile gigs and recordings taken into consideration, DownBeat magazine calls Vision Ahead’s self-titled debut album his “greatest accomplishment to date.” Released on Rockwood Music Hall’s largest stage in May 2018, Vision Ahead is a powerful declaration of intent for a band that’s been making waves on the modern jazz scene since its debut performance at Smalls Jazz Club. The group’s blend of classic, swinging jazz with elements of gospel, rock, soul, and fusion is a compelling showcase of Barber’s broad stylistic range as a composer and performer. Jonathan Barber & Vision Ahead was featured and headline the 2018 Rainy Days Jazz Festival held in St. Petersburg and Moscow, Russia.

Trusted For Over 36 Years

'' was added to your shopping cart. Restock fee may apply to order cancellations. Please call 303-756-5777 for any questions regarding ETA.